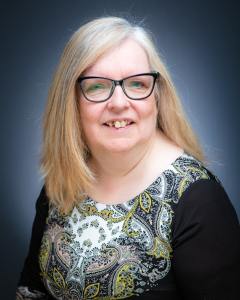 After working in the legal profession for 15 years as a Chartered Legal Executive leading a team of Civil Litigators in one of the top 100 law firms, Stella took a career break to bring up her two children. During this career break Stella worked part time in the fraud department of one of the top ten UK banks. When her children joined Benhurst she volunteered as a parent helper and became a member of staff in 2002. Quickly, she progressed through various roles from Teaching Assistant to Higher Level Teaching Assistant to Qualified Teacher Status. Stella has been a Local Governor since 2004.
Stella is passionate about computing and the use of technology to enhance learning and teaching; she helped to lead changes to the hardware, software and pedagogy across the school which were instrumental in moving Benhurst from Requires Improvement to Good. Stella is a SMART Ambassador and one of just three recognised UK SMART Innovators, she was named as the Outstanding SMART UK Exemplary Educator of the year in 2018. Stella has travelled to Madrid and Canada with SMART to take part in training and to act as a mentor to teachers from around the world. Stella leads many international seminars at Benhurst and plays a key role in the annual BETT week, leading sessions at Benhurst and the BETT show. Stella was a member of the BETT Advisory Board from 2018 – 2020; she leads the CAS Havering Primary Hub. In 2020-2021 Stella took on the role of Acting Deputy Head Teacher.
Stella is delighted to have taken on a Trust role of Digital Strategy Lead as well as the role of Computing Lead for the Rural Primary Schools.